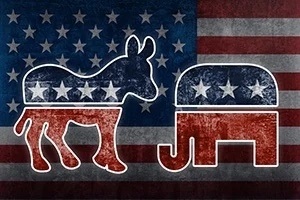 Politics' Effect on the Stock Market and Taxes

By now I’m sure you’re all sick of hearing about politics. I know I sure am. Hopefully, now that the Georgia run-off election is behind us, things will start to calm down. I have been getting a lot of questions from my clients about what I think the stock market is going to do now that it’s clear that the U.S. Government will be under full control of the Democratic Party – albeit with one of the slimmest margins that we’ve seen in many years. Second to the stock market question, clients want to be proactive with their tax planning under the new regime. Regardless of your political leanings, these are valid concerns that deserve contemplation.

Market participants and pundits have a saying as it relates to the ebb and flow of power on Capitol Hill: “Gridlock is good for the markets”. The market doesn’t like uncertainty and when important factors, such as tax laws and government budgets maintain the status quo, it at least knows what to expect on a go-forward basis. However, that being said, when you look historically at the stock market it hasn’t done that bad during periods of time of full party control.

Research company Bespoke Investment Group out of New York recently published their analysis of this. They tracked the performance of the Dow Jones Industrial Average during various political control scenarios going back to the year 1901. They found that, on average, the market performed the best during periods of Congressional gridlock while a Democratic President sat in the White House, which came in at an average annual return of 8.42%. So, that would confirm the “gridlock” theory. However, they also found that the market did almost as well (with an average annual return of 7.85%) during periods where one political party had full control. When you factor in other considerations such as the continuation of low interest rates and the potential for more stimulus due to the ongoing pandemic, the consensus on Wall Street is that the stock market will be higher 6-12 months from now…but expect more volatility along the way.

Switching gears to what we might expect as it relates to tax policy, the slim majority in both houses of Congress will likely limit many dramatic changes that have been floated out there over the past year. However, Congress can use budget reconciliations to pass tax law where only a simple majority vote is needed. So, what are some of the changes we might see?

First of all, it’s highly likely that the top tax rate for the highest income earners will go back up to 39.6% which is where it was prior to the 2017 tax cuts (it has been at 37% for the last 3 years). Next, we will probably see the current $10,000 limit on state and local tax deductions increase, and probably double, up to $20,000. While the increase of this tax deduction certainly helps high income earners, it will help a great number of middle-class taxpayers located in states that have high state income taxes, such as New York and California. Third, the corporate tax rate, which was cut to 21% for the past three years (after being at 35% for several decades) will likely be increased to 28%.

Beyond these changes, we are likely to also see the top tax rate on capital gains move from the current 20% to 24%. This is lower than what the Biden campaign has been promoting (effectively 39.6%), however the small majority the Democrats have would make it extremely difficult, if not impossible, to increase it much beyond 24%.

The one tax proposal that the Biden campaign has been talking about that has the highest chance of failing is the one where the Social Security tax would apply to earned income over a $400,000 threshold. These types of changes can’t be done through the budget reconciliation process and therefore would need 60 Senate votes to break a filibuster.

As always, I recommend that you speak to your financial and tax advisors about how any of this may or may not affect your specific situation.